The Lord God's presence is physically manifest inside the Holy of Holies, or the Most Holy Place room inside the Tent of Meeting, Tabernacle, and Temple. God enters. God leaves. In 586 BC God leaves. Did you notice?

We ponder Nahum's prophesy regarding Assyria, Nineveh, Judah and modern automobiles. We stop to examine some 7th century place names and Nahum's reluctance to use the wicked city Nineveh's name. While we poke a little fun of the modern car idea, we urge other Christians not to do so.

We see God arriving at the break of dawn in Psalm 46, plus some missing text (perhaps).

We connect the seaweed wrapped around Jonah's head, while he is inside the big fish, with the cloth wrappings around Jesus' face and head while his inside the tomb.

The Bible contains a fair amount of repeated material. We give an example from Kings, Chronicles, and Isaiah involving Hezekiah's extension of life. 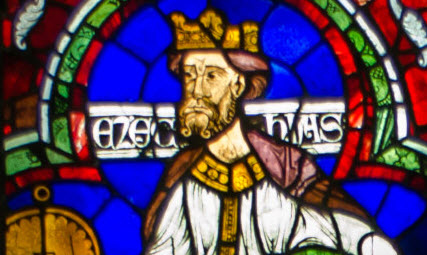 Hezekiah, Godly king of Judah, invites the remnant in recently destroyed Israel to a refreshing Passover service. Many refuse!

The Lord's Prayer does not come cleanly out of the Bible in one nice, well-formulated piece. Matthew and Luke present different versions, and scholarly publications of both Greek and English New Testaments differ on the exclusion and inclusion of phrases in both Matthew and Luke.

Read the Actual Bible for Yourself!

If you like our work, and wish to support our endeavor to encourage both Christians and non-Christians to read the actual Bible for themselves, you can send us a few bucks to help make this possible. We use PayPal.

Read the Actual Bible for Yourself