Our bit concerns the difficult parable of the Shrewd Manager and the possibility of using the adjacent parable of the Prodigal Son as an aid to understanding that of the unscrupulous but shrewd manager.

And no, God does not approve of carousing or dishonesty, but we do hope he approves of click-bait titles.

First read the parable of the rich business owner and his Shrewd Manager in Luke 16:1-18. This is one of the more difficult passages in the gospels, not only to understand but to accept. It is one of those Bible passages that you wish God would have had rewritten more clearly.  On its face, as it is written and translated, Jesus seems to give approval for worldly dishonesty and theft. The plain factual details of events are not clear, and Christians interpreters have reached no consensus of interpretation as this parable has been sliced, diced, and dissected over the centuries. Interpretation is elusive.

We will avoid offering our own interpretation here.

We will instead offer the following thesis, which we have taken from scripture analysts David Landry, Ben May, and Michael Austin. It is this:

This is our Bible Bit.

First let us counter our thesis with the evidence that the traditionally named Prodigal Son parable could reasonably have been named the “Lost” Son, and is in fact properly grouped with the adjacent Lost Sheep and Lost Coin. These three stories are grouped together in chapter 15 of Luke.

Nevertheless, and back to our thesis, lets offer some side-by-side text, comparing the Prodigal Son with the Shrewd Manager, using the New American Standard Bible translation:

PS:  A man had two sons. The younger of them…
SM:  There was a rich man who had a manager…

PS:  and there he squandered his estate with loose living.
SM:  this manager was reported to him as squandering his  possessions.

PS:  he came to his senses, he said, ‘How many of my  father’s hired men have more than enough bread, but I am dying here with hunger!
SM:  said to himself, ‘What shall I do… I am not strong enough to dig; I am ashamed to beg.

PS:  his father saw him and felt compassion for him, and  ran and embraced him and kissed him…
SM:  his master praised the unrighteous manager because he acted shrewdly;

PS:  we had to celebrate and rejoice, for this brother of yours was dead and has begun to live, and was lost  and has been found.
SM:  Make friends for yourselves by means of the wealth  of unrighteousness, so that when it fails, they will receive you into eternal dwellings. 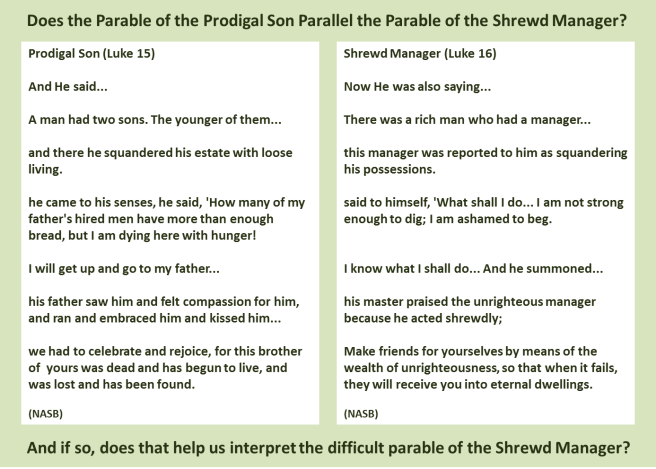 First, are the passages we offer as parallel truly parallel in sentence structure (in the Greek or English), factual meaning, granular interpretation (detail-by-detail), and Luke’s intent? Then, even if this is the case, does it help us in our overall interpretation of the  Shrewd Manager?

Our take-away from the Prodigal Son is that the father is God, the lost son is a sinner, and even the most lost of sinners can receive salvation from a patient, loving, forgiving God. Therefore, overlaying the Prodigal Son over the Shrewd Managers, does this make the rich land owner God, the shrewd manager the lost sinner, and his shrewdness in dealing with customer debts an act of confession and acceptance?   Bringing about salvation from the loving, forgiving God/owner?

We are not sure. There remain too many internal difficulties (which we haven’t touched on here) inside the Shrewd Manager parable for any answer to jump out.

Nor are we even fully convinced that the parallel offered here is truly a parallel. Perhaps they are merely two similarly outlined stories placed side-by-side. Furthermore, we’d like to see an analysis of the Greek text to check wording, phrasing, and sentence structure parallels.

At the same time we are enthusiastic proponents of the basic analytic tool of comparing what-came-before and what-came-after, with the concomitant belief that Biblical writers and God the source placed the text where it lies now, piece by piece, with deliberate intent and intentional meaning.

Read the full text of the two parables in various English translations, and read the concluding words of Christ and following text, especially in chapter 16. Did we miss any parallels? Does the material we cut out hurt our thesis? Does it somehow help?

Again, the internal difficulties of the Shrewd Manager make overlaying the Prodigal Son difficult. It remains to figure these out, and we deliberately avoided going down those paths here.

What do you see in our search for parallels? Does your commentary or study Bible address this? Are you able to comment on the Greek?  If so, leave us a note, and please, when you comment, always cite scripture and share the thoughts of those who have studied these things closely.

We are a small team of Christians. Our ministry is to coax Christians and Jews to do more Bible reading, and coax non-Christians to read the actual Bible for themselves. Bible Bits is focused primarily on the first group: those who are already Christians or Jews, especially those who have an analytical nature and curiosity for digging into the small details of the Bible text and God's message. We are evangelical Christians. As such our bias is Christian and we anticipate our audience to be largely Christian, somewhat Jewish, and hopefully somewhat neither. We are evangelical Christians. Our focus is salvation. Our desire is to serve on Christ's salvation team. We desire to see Christ bring people to him and to his eternal salvation. Our method is to promote Bible reading and study. God's blessings to you! Read the Actual Bible for Yourself! View all posts by Bible Bits

Read the Actual Bible for Yourself!

If you like our work, and wish to support our endeavor to encourage both Christians and non-Christians to read the actual Bible for themselves, you can send us a few bucks to help make this possible. We use PayPal.

Read the Actual Bible for Yourself